Despite my best intentions, April didn’t quite equal regular blog entries.  Maybe that’s not a bad thing, as the monthly reviews seem to keep my rambling to a minimum.  At any rate…here we gooooo!

During the first few days of April, we spent a few evenings making late evening trips to Hershey Medical Center to visit Josh’s dad, who did a brief stint inpatient sentence.  Thankfully, he fared well and was released after a week with minimal restrictions.  They were able to avoid surgery while he was in the hospital and, actually, he had surgery today (5/1/2017).  The surgery went well and uneventful and he reports that he’s doing just fine so far which is very much of a blessing.

I suffered my third pesky nosebleed on Saturday, 4/8/2017, while unloading two weeks of groceries from the car while Josh was away for the weekend.  This whole nosebleed thing is getting pretty annoying.  Hopefully the heat is done running in the house and at my work for the year, which I’m hoping is the reason for the nosebleeds.  Fingers crossed, anyway!

Mid-April brought a pretty cool surprise.  I got an e-mail at work, letting me know that I had been nominated for the 2016 Governor’s Award for Excellence.  Pretty cool!

This kind of made my month.

We took off work and headed to Kent Island on Friday, 4/21/2017, for the Bay Bridge Boat Show.  (Side Note: Apparently the 2017 Bay Bridge Boat Show had it’s biggest Friday attendance since 2006 this year.)  The weather was PERFECT and the boat show was pretty good, too.  The morning was a bit rainy, which seemed to keep the big crowds away on Friday and that worked out really well for us.  We were able to board and explore all of the boats we were interested in without having to wait or cram in with 10 other people.

We boarded a ton of boats including a brand new DeFever 46 Pilothouse, a Silverton 36 Convertible, a Silverton 48 Convertible, a brand new Azimut 54, a Mainship 34, a brand new Tiara 44 Fly, a brand new Beneteau Monte Carlo 6, a brand new Sabre 38 and an older Bayliner 3488.  We agreed that the Azimut 54 and the Beneteau Monte Carlo 6 felt like rich’s persons play toy.  They were beautiful, but they didn’t feel sturdy.  Plastic laminate finishes throughout and extremely high price tags turned us off pretty quickly.  The Sabre 38 was nice but didn’t appear to have the open space we’re looking for in the salon.  The Mainship 34 and the Bayliner 3488 were both used boats but in pretty good condition.  Both were okay but nothing to really write home about.  I did like the open space in the Mainship 34 and the ability to configure furniture any way we would want.  The Tiara 44 Fly was absolutely beautiful but not at all the type of boat we’re looking for.  We certainly don’t belong owning anything that nice.  The Silverton 36 Convertible felt too small with very limited storage.  I loved the Silverton 48 Convertible, of course.  No surprise there.  (It’s name was Miller Time, so that helped, too.)  We got talking with the broker that was onboard, who ended up being employed by Kadey-Krogen.  Her name was Jodi and we really enjoyed talking with her.  She was really down-to-earth and we were able to have a no-pressure discussion with her about our future boat.  We got her card and intend to keep her in mind as a future broker possibility, as she offered to assist us with more than just Kadey-Krogens.

And then we boarded the DeFever 46 Pilothouse.  And loved it.  How could we not?!  There was a BUNCH to love!  I felt like it was the safest feeling boat I’ve been on, thanks to the hip-height sides, plenty of hand holds and wide, deep steps throughout.  I also really liked what Josh calls the Portuguese bridge and feel like that might be a big win as far as the dog (and his dopicness) is considered.  Josh really liked the big cockpit, giant bridge deck for a big ass dinghy, full displacement hull and efficient motors.  The huge, open pilothouse was a big plus for Josh, too.  We’ve decided that the DeFever 46 Pilothouse has everything thing on our need list, almost everything on our want list and nothing on our one-item dealbreaker list.  So, that’s all well and good except satisfying our list that well will cost us $800,000.  Meh.  Josh reassures me that the DeFever 49 Pilothouse is very, very similar to this new DeFever 46 Pilothouse, minus the $800,000 pricetag.  Interestingly enough, we had a DeFever 49 on our list but crossed it off on 3/19/2017.  So, it’s back on and we’ll continue to look for options that are a little less expensive that the exact boat that’s on our list. 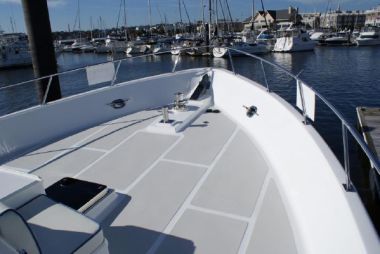 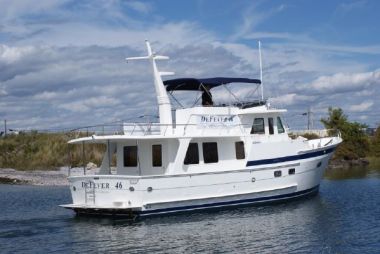 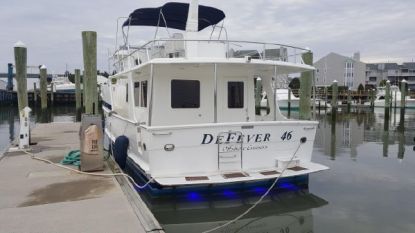 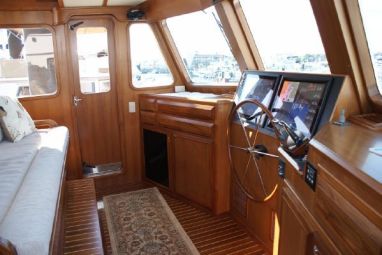 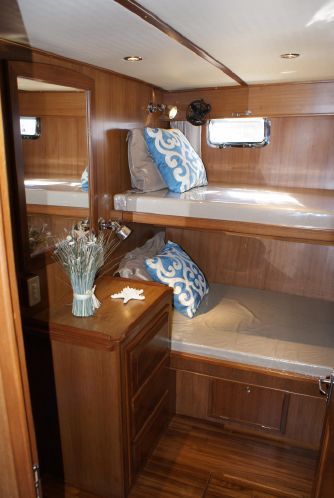 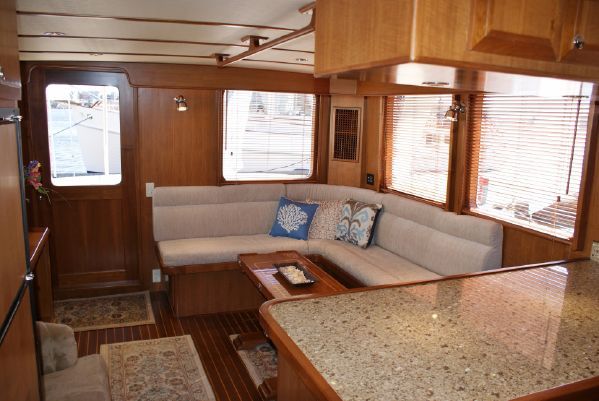 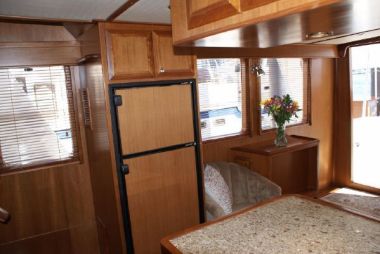 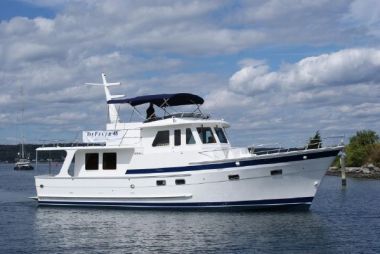 As we finished drooling at the boat show, Josh’s brother called to let us know he was in town.  So, the three of us spent Friday evening bouncing between The Jetty, Big Owl Tiki Bar and The Narrows.  (Note to future self: We have NO business being in The Narrows.  It’s the place with the big glass windows, overlooking the peasants at Big Owl Tiki Bar.  Just stay at Big Owl next time.)  We couldn’t have asked for a better night.

The 4th Annual Family Striper Trip was Saturday, 4/22/2017 and Sunday, 4/23/2017 with Rockaholic Fishing.  We had the afternoon trip on Saturday and the weather wasn’t great.  It was cold and rainy and the ride wasn’t nearly as pleasant as it usually is, but Mike and Adam managed to snag a fish each.  We had dinner at Bridges on Saturday night after we got back.  I highly recommend the Crab Pesto Pizza and Coconut Shrimp – both are FANTASTIC!  Sunday’s morning trip offered much better weather, though still a bit cold.  Josh and Matt were the winners on Sunday, reeling in a fish each.  Overall, it was a great weekend! 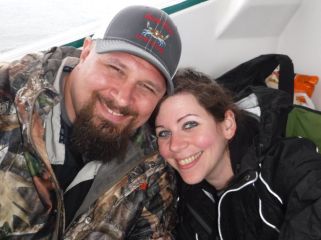 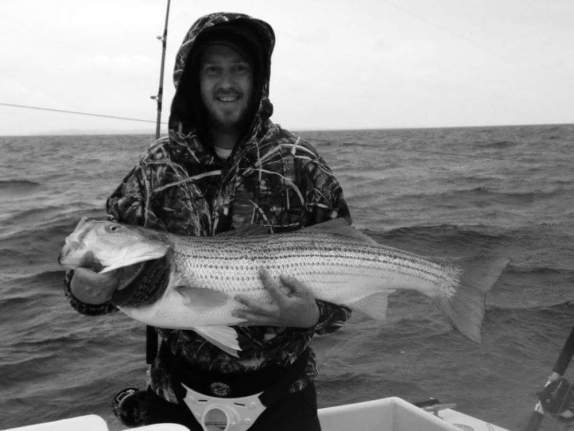 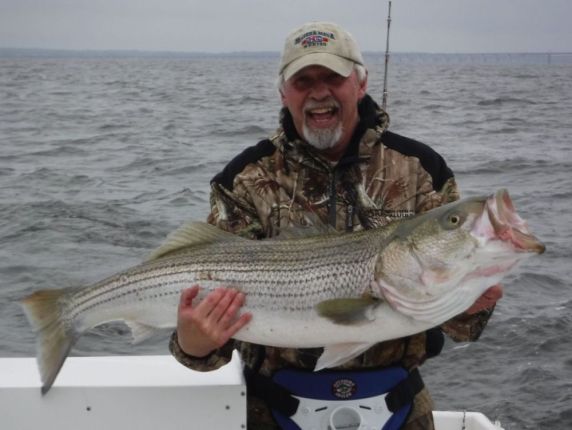 This past Saturday, 4/29/2017, was the township library’s Flea Market.  10 x 10 spots were only a $10 donation to the library, so I reserved a spot well in advance, as I had compiled a TON of stuff from the basement that I wanted to sell.  Turns out I didn’t need to reserve a spot, as there were only four stands total – one of which was some kind of jewelry with a hot pink canopy that took flight in a gust of wind, mid-flea market.  (Josh to the rescue!)  Much to my surprise, we ended up making $75 from the handful of people that came out to shop.  We only went home with $70, though, as Josh ate $5 of my profit after buying a whoopie pie as big as his head.

It’s pretty surreal seeing my stuff in the middle of the library’s parking lot.

Sunday, 4/30/2017, was Grandma’s 83rd birthday.  We had filet mignon’s on the grill while we hung out on the deck, enjoying the beautiful weather and listening to the men compare stories of their medical issues.  We’re a wild group, I tell ya!

And now, we’re wrapping up the first day of May!  I can hardly believe that it’s almost time for summer but I am SO ready for warm sunshine and cold beer!