Everyone was up early again today.  I, of course, was the last one out of bed, as usual.  Josh cooked us pancakes and little sausages for breakfast at the park’s outdoor cooking pavilion.  I could get used to eating breakfast outside, being warmed by the sun’s upcoming rays every morning.  Before we made big plans for the day, five of us decided that we would try to schedule a horseback ride for today, as Josh has been looking forward to taking a tour of Colorado’s beauty on a horse.  We were able to book a two hour horseback ride at 2pm today with Rocky Mountain Wildlife Park, which was only a few minutes from the cabin.  We figured we had plenty of time to get a hike in before horseback riding and decided to ride out to Silver Falls.  Since Silver Falls was about a half hour from the cabin, we planned to go directly from Silver Falls to Rocky Mountain Wildlife Park, which meant wearing jeans for the hike.  Thankfully, that was the only kind of crappy part of the hike.

The parking area for Silver Falls is located about 19 miles from Pagosa Springs along East Fork Road (Forest Road 667). FR667 is a dirt road and there were many washboard and wash areas which Josh’s truck handled excellently.  The road crosses multiple creeks, but because most of the snowmelt had already happened, there was not much water to go through.  The trail started at the historic Silver Falls Forest Service Guard Station and at an elevation of 8,600 feet.

The hike up to Silver Falls was short and sweet.  It was about an 1/8th of a mile from the trailhead to the waterfall.  The trail started out easy, but became increasingly steep before the emerging from the woods to the spectacular site of Silver Falls. The waterfall plunged first from the cliffs above the trail, then tumbled down in a series of dazzling cascades.  The best part?  We had the whole place to ourselves!  Silver Falls is Josh’s favorite of the waterfalls we saw on our trip. 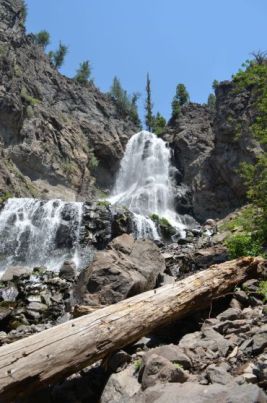 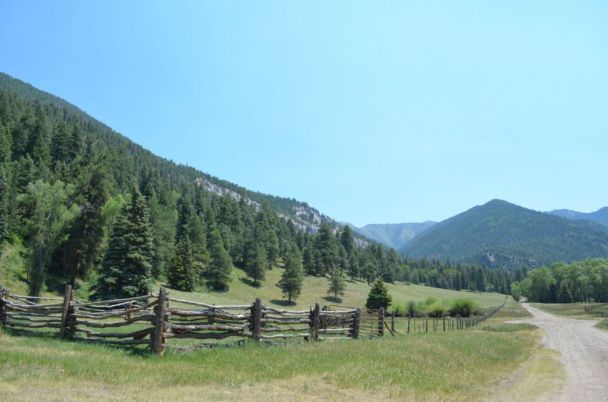 After Silver Falls, it was time for horseback riding at the Rocky Mountain Wildlife Park at 2pm.  Against my better judgement, I agreed to the two hour ride that started on a trailhead in San Juan National Forest.  The two hour ride was $60 per person, which, based on how hard the horses worked, seemed like a pretty good deal!  Since my first horse experience a few years ago didn’t go so well…(Montana nose-to-tail trail ride turned into galloping off into the sunset with no control over the beast)…I was pretty apprehensive to embark on a two hour adventure on another metal-shoed monster.  We got situated on our horses – Josh riding a Belgian draft horse named Lancer and me on a recently-rehabbed, very overweight Ruger – and got underway.  (For memory’s sake…Josh’s dad rode Apollo, Josh’s mom rode Arrow a.k.a. Eeyore and Josh’s aunt rode Pete a.k.a. Pedro)  Our guides, Scott and Zoe, were fantastic and I felt much better about having a little control over what my horse was doing (which was eating, nonstop, every chance he could).  While I didn’t take many pictures for fear of letting go of the horse controls, it was a beautiful ride!  But, man, was it HOT!  We tipped our guides and headed back to the cabin for some dinner. 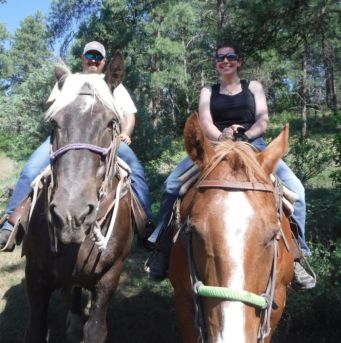 The remaining 6 family members that would join our group arrived at 9:30pm this evening, bringing the new group total to 14.  The rest of this adventure is going to get INTERESTING!  The plan for tomorrow is to get 14 people up, fed and in vehicles by 8am in order to leave for Mesa Verde.  We’ll see how this goes!