I’m going to consider the plan for this morning pretty successful!  14 people were up, fed and in vehicles by 8:20am, only 20 minutes past our original planned departure time.  Not too shabby at all, especially for the first day after six of the people arrived in Colorado.  Surprisingly, the twin 10-year-old boys included in that 14 people figure were up, dressed and ready to help cook breakfast at 7am.  I’d consider that a HUGE success!  Breakfast was breakfast sandwiches on the grill at the camp’s cookout pavilion.  Yum!  We piled into 4 vehicles and headed to Mesa Verde for the day.

We arrived at Mesa Verde at about 11am, having made only one, 1/2 hour stop to pee and for the masses to get their Starbucks coffee fix.  Josh’s uncle booked a tour of Mesa Verde’s Cliff Palace tour for all of us 5pm because there were no other tours available for the day.  Doing some quick math, we decided that we would leave Mesa Verde to head to Four Corners and then return to Mesa Verde in time for the tour.  Josh’s aunt and uncle decided to stay at Mesa Verde for the day instead of coming out to Four Corners, so, we piled back into 3 vehicles and set course for Four Corners, knowing that our timing had to be pretty spot on in order to avoid being late for the 5pm tour of Cliff Palace.

The drive to Four Corners was very much unlike the Colorado mountains we had grown accustomed to in the past few days.  We were driving through what appeared to be desert – very little water, very little greenery and very little living things other than us.  It was also much hotter – 97 degrees actually, which felt like you were standing on the sun.   Once we arrived, I quickly realized that Four Corners was everything I imagined it being – super hot, super touristy and super PACKED!  I never imagined there would be a waiting line to stand on the actual Four Corners marker, though.  I also never imagined that there would be booths set up, flea market style, along all four edges of the Four Corners monument for vendors from all four states to vend their wares to tourists passing through.  It was pretty cool! 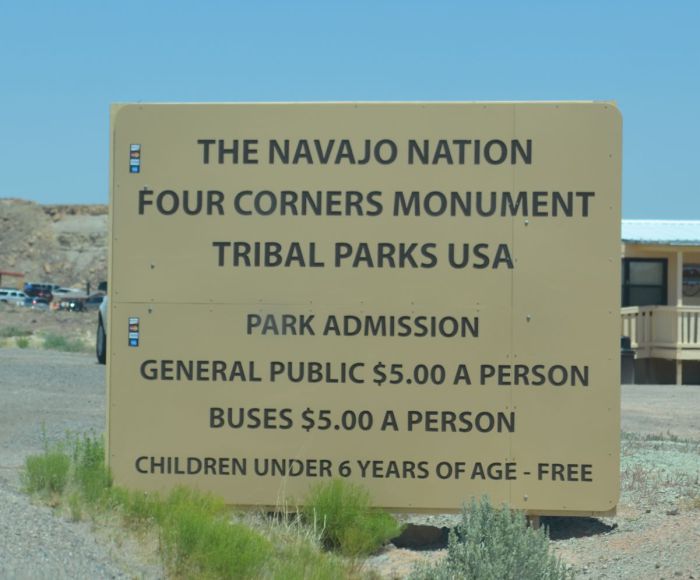 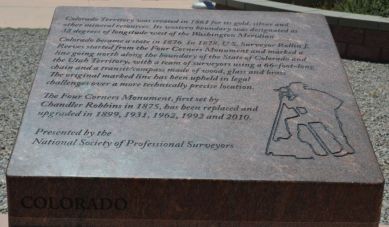 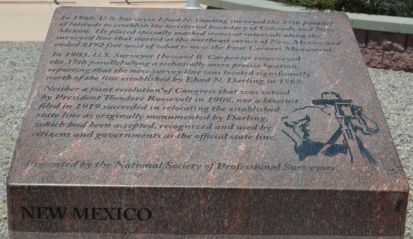 The flea market shops at Four Corners were filled with sterling silver and turquoise jewelry, tourist trinkets and dreamcatchers.  I told Josh that I’d like to get a bracelet while we were there, if I could find one I liked, as I didn’t want to buy a bunch of touristy stuff on our adventure, but, I wanted something to keep from our trip (other than just the bird book I bought at the Ranger Station).  Josh headed for the truck to get his wallet and, in the meantime, I found a big, beautiful sterling silver storytelling bracelet at the one stand and got to talking to the stand owner.  As Josh was returning from the truck, the stand owner pulled out a scrapbook and began showing us pictures of himself with a variety of famous movie stars and wearing what he described as really expensive shirts.  The stand owner said his name was Joe Begay.  Turns out, Joe worked in movies including Dances With Wolves, Three Amigos, Young Guns II, Boys on the Side, and A Hot Bath an’ a Stiff Drink and other productions.  He has also had roles on “Little House on the Prairie” and “One Life to Live.”  Joe explained that he handcrafts the storytelling bracelets and rings, reflecting a bit of himself in each story.  On the bracelet I chose, Joe featured himself chasing a jackrabbit through the desert, because, he said, he was really hungry.  The bracelet was beautiful and so was the experience.  Of course, I bought the bracelet.  Joe treated me to a really awesome Navajo chant as a thank you for my purchase.  It was AWESOME!

(Sidenote: A quick Google search produced some additional information about Joe Begay – Joe Begay is the name The White Man gave him when they sent him away to boarding school in Brigham City, Utah.  His Navajo name sounds like a hieroglyphic one might find in a cave – A ‘ke’ ha’ Lo’ – a boy who runs in sand.  Joe has appeared in Little House on the Prairie, Boys On The Side, Tin Cup and The Buffalo Soldiers and has pictures and personalized autographs from Michael Landon, Kevin Costner and Danny Glover to prove it.  In Joe’s scrapbook, there are also photos of a young man in a military uniform and a green beret.  This was Joe before the weathered features, and after a haircut.  He was a U.S. Army Special Forces paratrooper with the 82nd Airborne Infantry Division out of Fort Bragg, N.C.)

After taking everything in at Four Corners, we hopped back in the truck and took off on a mad dash back to Mesa Verde.  It was 1pm when we got in the truck. It an hour drive back from Four Corners to Mesa Verde, we hadn’t eaten lunch (and hadn’t really seen much food-wise on our way out to Four Corners), we needed gas, it was at least an hour drive from the entrance of Mesa Verde to Cliff Palace and everyone had to pee.  To say we were cutting it short on time was an understatement.  Luckily, we’re not too good for truck stop mystery box pizza and chicken because that was the only option.  Well, that or go hungry until much later in the evening.  We made it back to Mesa Verde and out to Cliff Palace with a few minutes to spare.  We took a guided tour of Cliff Palace.  The sights on the tour were spectacular, but, it was then that I realized that guided tours simply aren’t my “thing.”  Something about being told to put the cameras away because “picture time” is later (though, it really wasn’t later) and being hollered at to move quicker throughout the tour just didn’t do it for me.  (Note to self: Forego the guided tours from here on out.  Do the audio tour thing on your phone instead of the actual real, live human being guide.  You’re going to think you paid them to torture you again if you don’t.)  After the tour, our group broke into 4 vehicles and explored Mesa Verde on our own in the remaining sunlight.  What an incredible, thought-provoking place! 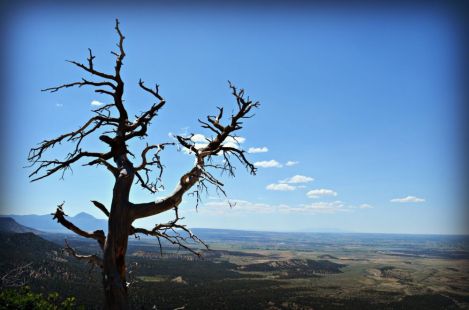 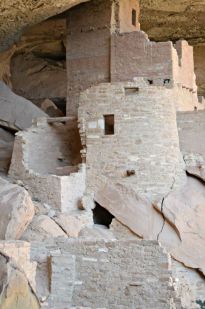 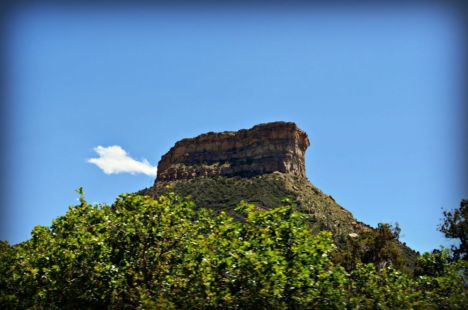 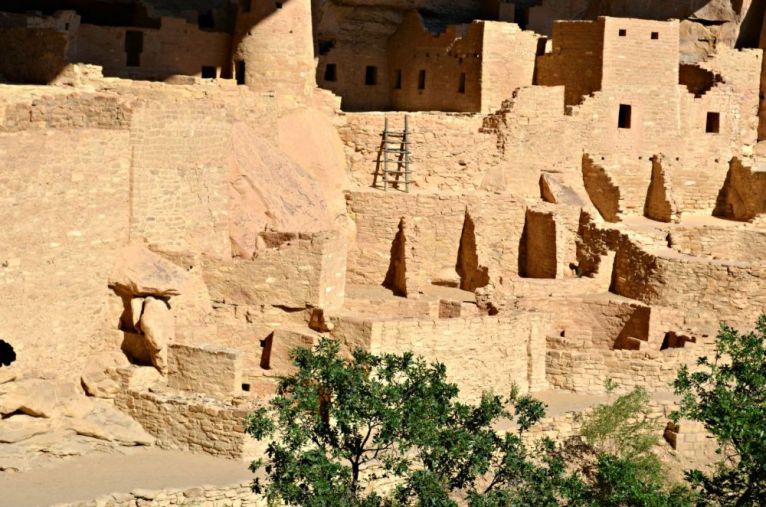 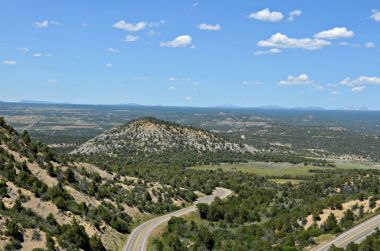 We left Mesa Verde around 8pm and were treated to seeing a few elk and mule deer on our way back to the cabin.  We couldn’t believe how different in color the elk were from the elk that are in Pennsylvania.  More curious, the elk in Pennsylvania right now have been imported from Colorado, so you’d think they’d be the same color.  They are not.  Why?  I haven’t been able to find out just yet.

We arrived back at the cabin at 10pm and were informed, via text message, that dinner was “fend for yourselves.”  At that point, my mystery box truck stop pizza had long ago quit filling the hole in my stomach, so I would have eaten about anything.  We had half-warm leftovers and called it a night.  (With intentions to eat the SHIT out of breakfast tomorrow morning!)

The plan for tomorrow is to get 14 people up, fed and in vehicles, with ATV’s hitched to two of the vehicles, by 8am tomorrow morning in order to head for Piedra Falls for hiking and ATV riding.  We’ll see if day two of herding 14 stray cats works out as (relatively) well as it did today!