6:15am this morning and my phone was already shrieking.  Text message alerts from our bank letting us know three deposits had hit our checking account.  Two of them were expected, as it’s payday for both of us.  But the third was a bit unexpected.  Our 2016 federal income tax refund had been deposited into our account, a mere week after we filed it!  How exciting!  I had a fleeting desire to go to the bank, withdraw all the money that was sitting idly in our checking account so I could roll around in it for a while before sending it on its way.  There’s something oddly exciting about seeing over $7,000 just hanging out in your checking account when you wake up in the morning.  Even if you know immediately that almost all of it is earmarked for bills and feeding the Debt Monster.  Instead of going to the bank and spending the rest of my day rolling around in money, I went to work.  (Sometimes I really hate being responsible.)  We decided that I would wait until Josh got home from work this afternoon in order to “play money” a.k.a. send all of our money away.

It appears as though the guys will be lucky enough to be graced with my presence for this year’s fishing trip with Rockaholic Fishing on April 22nd and 23rd!  It’s unfortunate that the family friend’s son won’t be in the country in order to participate in the expedition, but, offered his spot, I certainly won’t say no!  We’ll be staying at the Best Western again this year, as the Holiday Inn Express didn’t have any rooms available (again this year).  Eager to spend as much time as possible on Kent Island, Josh and I are planning to take Friday, April 21st off work, drop the dog off at doggy day care bright and sunshiny early and then hit the road, en route to the Island for the Bay Bridge Boat Show.  The plan is to just stay on the Island Friday night and hang out Saturday morning until the fishing trip the next afternoon.  Exciting stuff!  The only potential hiccup at this point would be if the yard sale I’m planning on pawning my crap at ends up being scheduled for the same weekend.  With any luck, it’ll be planned for any other weekend.

A ridiculously brief update on the status of my case with the PHRC, mostly for the benefit of my memory.  On Wednesday, I received my employer’s “response” to my complaint.  After what they’ve called a “reasonable investigation,” they denied everything contained in my complaint.  Well, everything except for the fact that I was hired on October 17, 2011.  Well, it’s good to know we can agree on something!  The investigation continues.

A bright spot in my otherwise dismal employment with my current employer…a very sweet coworker of mine informed me yesterday that she nominated me for the “Governor’s Award for Excellence.”  We get e-mails every year, soliciting nominations for the award, and, until now, I haven’t really paid much attention to the e-mails honestly.  So, I did some research to find out just what I had been nominated for and was able to determine that the “Governor’s Awards for Excellence is a prestigious and competitive program that recognizes commonwealth employees for exemplary job performance or service that reflects initiative, leadership, innovation and increased efficiency.”  I really like A LOT Of the words in that description!  So much so that I may add some of them to my resume!  Competitive, innovative, initiative…ooooooo!  Simply being nominated for the award pulled at my heartstrings a bit.  2016 was a really rough year at work.  I made it, but not without some anxiety issues, paranoia, distrust and disgust damage that I’m fairly certain will be pretty long-lasting.  When 2016 ended, I could not wait to put my 2016 work life behind me and move on to, hopefully, a better, brighter and MUCH less dramatic 2017.  But, now I’ve been nominated for this award, based on my work performance in 2016.  2016 that was full of tears, stress, belly aches and turmoil.  It’s bittersweet in a way, I guess.  And even if I don’t end up being the winner of the award, knowing that, at least as far as my coworkers could tell, I did a rockstar job in 2016, despite EVERYTHING that was / is going on, is pretty comforting.  I should probably start writing my acceptance speech now…HA!

Work continues on our winter project for this year – renovating the master bedroom and den on the second floor of our home.  The master bedroom is nearly complete, with some really small things left to do like changing out door hardware and a few pieces of trim.  The difference is stunning! 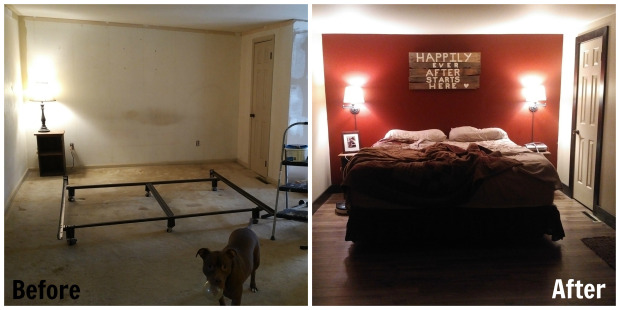